This is my second installment on New Orleans.  It’s later than I had hoped, but that’s life at the moment.  Today, I am focusing on my visit to Oak Alley Plantation.    I grew up in the South, yet I’ve never been to a plantation before.  I’ve always wanted to visit one.  First, a few facts:

Now, let’s get a look at this antebellum beauty.

Looking at those photos, one would think the house is huge.  It’s not.  At least not by today’s standards.  There’s maybe 4-6 rooms on each of the two floors. Those rooms are not that big.

A few photos of the inside.  Sorry, no flash was aloud. 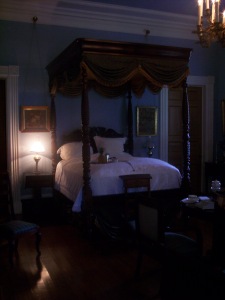 The views surrounding the house are amazing. 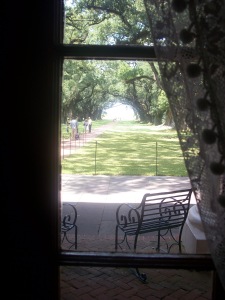 View from the first floor.

View from the top floor. The mound of grass at the end is the levee.

As I mentioned, Oak Alley was a sugar plantation.  There are still acres of sugarcane surrounding the house. Dotting the yard are these huge cast iron bowls, called Sugar Kettles.

These kettles were used in turning sugarcane into molasses and/or crystallized sugar.  I’m not going to go into how they were used, but here is a place with great explanations and photos.

I really enjoyed the plantation, and I learned a lot.

Reading:  I am reading an indie book on my Kindle.  Not finished yet.  I keep falling asleep.  That’s no reflection of the writer, I’m just exhausted from working retail 6 days a week 😦

Editing:  I hope to sneak a little in today.

Submissions:  I am working on releasing a short story on Wattpad.  The problem is I don’t have a cover.  It’s a free short story, so the cover may be the title and not much else.  Still thinking on that.