It’s been a while since I’ve posted. Life has been crazy, forcing me to put aside writing and focus on home and hearth. And read. I hope Spring will bring a little peace and time, and frame of mind, to write.

Every Southerner knows what haint blue is and what it’s used for.

Haint Blue is a specific color traditionally used in the South to paint the ceiling of porches. I don’t have a porch. If I did I would paint it blue. A soft blue-green to be precise.

But why the name?

Haint means to haunt or ghost.

Why? If asked most will say the ceiling is painted blue becasue that’s just the way it is done. I’ve never seen any color other than blue.  A soft shade of blue brings to mind breezy summer days. It invites a body in to sit a spell and drink iced tea in a swing. I’m not entirely sure what a ghost has to do with it.

A bit of research…

Ah, here we go. Haint blue is protection from influence of restless spirits, much like our bottle trees.

Sherman Williams has a nice page on Haint blue if you are interested in reading a bit about it and browsing through the colors. Maybe after my kitchen is finished my honey will build me a porch.

The Land of Color also has a nice article full of lovely colors.

The Awl takes a more historical look at haint blue. I highly suggest this article.

There you go. Haint blue ceilings. What color is your porch?

If you’ve never visited Silver Springs State Park, you may not be aware of all it has to offer. Click here. Most are familiar with the glass bottom boat ride and that’s it. But there is much more to it than that. I  remember visiting the park when I was about 10. The glass bottom boat sticks out most in my mind– that and the monkeys. Yes, I said monkeys;) I apologize for all the photos. 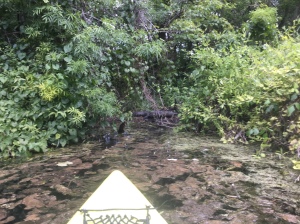 Silver Springs is a park with multiple fresh water springs. The water is crystal clear to bright, clear blue. The blue areas seem to

be deeper. In some areas it is 85 feet deep, it only looks about 25 ft deep. Remember that if you decide to go kayaking. Swimming isn’t allowed where we were. And really, it’s covered with gators! This little guy was sleeping on the bank. A much larger gator decided to swim around us later on on the kayak trip. My youngest daughter was scared he would knock her off the boat. He didn’t. He was more concerned with swimming to the other side of the river. 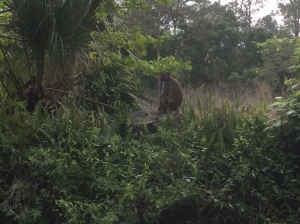 We also had a chance to spot the elusive Rhesus monkeys that live in forests surrounding the river.  Ages ago, Tarzan was filmed at Silver Springs. The old black and white shows. After filming they just turned them loose. They also filmed parts of the old Creature from the Black Lagoon and the James Bond film Moonraker.

There are a few hiking/walking trails surrounding the park. They give you the opportunity to see the natural surroundings. We came across turtles, birds, bunnies, and snakes. Watch where you step.

The big draw to the park is the glass bottom boat. Out pilot has been leading boat tours since 1955! He was awesome. He showed us where some of the springs bubbled through cracks in the river and pointed out wildlife that might have slipped by us. One of the most interesting things, only visible by glass bottom boat, is a sunken Spanish ship/boat. Most of the boat has rotted away but enough is left to make out it was a boat. 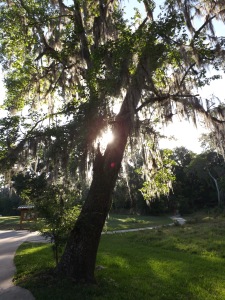 So how clear is the water? I’m glad you asked. This photo was taken from an overlook on the walkway next to one of the deepest sections of the river. Near where you board the boats. I think it is 85 feet deep here. It was gorgeous. I will leave you with one more photo. My oldest fell in love with all the Spanish moss. We have dozens of photos of just moss 😉

If you don’t know, Florida is resting on a giant aquifer. That is the reason the state has fresh water springs and sink holes.    Basically, Florida is one giant marshland;)

The first stop on our road trip was Ponce de Leon Springs. Click here for the real stats. The spring is fresh water and crystal clear. Let’s not forget COLD! The water stays at 72* year round. Surrounding the spring is woodlands

with trails. Those are fun. You get to see where the high water line is.

The water depth is also misleading. The water behind that tree is clear like tap water, giving the impression that it’s only knee deep. It was quite a shock when I climbed in to discover it was waist deep.

We visited the spring twice, once on the beginning of the trip and once at the end. The first time only my daughter the mermaid was willing to get in. She even admitted the water was cold. Of course, we knew that from her blue fingers and toes.

It’s actually close enough for us to visit on weekends during summer, but the park is small and fills up quick. We don’t have that kind of clear water where I live. It’s a bit mesmerizing to swim and see the fish, turtles, etc swim around you. Take goggles, it makes exploration easier.

Now that Row80 has a link, I’m back. I can’t explain why the link even matters, but it does. I was lost without it. Don’t you hate it when you put your Ipod on shuffle and you have to keep skipping Christmas music ;(  On with the goals. 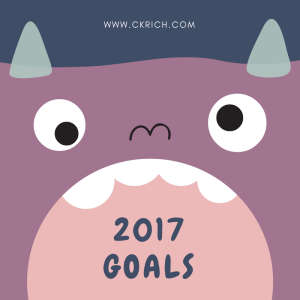 There you go. Not bad. Even though I didn’t meet two goals, I still made progress. Let’s face it. Any time I spend moving is a good thing. I think I need to memorize the opening dance sequence of Guardians of the Galaxy. No, I will not post it on Youtube when I’m done. I’m not breaking the internet.

How did your week go?

How did I forget to make a TBR list for January? It’s just as well. I read weird stuff, and spent most of my time on one book 😉

Before I jump to the TBR, this is what I read in January:

That’s 6/80 books for the year. All of them were really good, just in different ways. 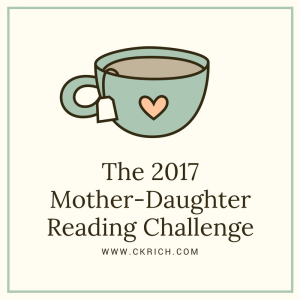 There’s plenty of time to join the fun with the Mother-Daughter Reading Challenge. I’ve marked 3 off that list.

Reading 4 books this month may be pushing it, but I will try.

What’s on your TBR pile?

I’ve been busy planning summer vacation. We haven’t traveled in a while, so I am really looking forward to this. No, I will not tell you when I’m leaving. Let’s be real. It is this summer, before August. Where am I going?

Actually, I’ve been planning this trip for years on Pinterest. This is a special trip. My mother (Hi Mom!) grew up in San Antonio and she would take us there every few years. My children have never been. This trip is like reliving my childhood and sharing family history with the wee ones all at the same time. So I am really excited.

Things I will not do in Texas:

Things I will do in Texas:

That’s all so far. I’m still planning and need to make reservations. If you have been to San Antonio let me know where I should visit and eat. I have plans to eat at Mi Tierra’s twice, maybe more 🙂 We love mexican and BBQ. Actually we love it all.

Where do you want to go this summer?

I’m continuing with the weirdness that is Mobile. The city has been around since 1702 (I think), it’s had plenty of time to become eccentric.

13. Azalea Trail Maids- These “maids” are high school seniors. A handful are chosen from each school. The girls act as ambassadors to the city. They can be found at most events in and around the city. They even travel out of town. My oldest thought they were princesses when she was little. Every dress is different and there is only one pink. She’s the Queen.

14.  Don’t touch the fishing pole if it’s not yours. This should go without saying, but ask permission first. If it belongs to a southerner they won’t tell you to leave it alone. That would be rude. But they will question your upbringing.

15.  Sushi is pretty bait.  Okay, I made that one up. Sushi is becoming more popular here, but most people are a bit shy of it. I have tried it and don’t care for it. I can appreciate it from a far.

16. There are 2 classic ingredients for most desserts. Pecans and coconut. Almost everything sweet has either pecans or coconut in it. Most have both. I don’t care for either. Any church luncheon or social group buffet will have an assortment of cakes, cookies, and bars all made with pecans and coconuts.

17. Don’t swim at dusk or dawn. If you venture south to the Gulf of Mexico. We have the most beautiful sugar white beaches.  The seafood is to die for. That’s just an expression. If you swim at dusk or dawn you run the risk of feeding the apex predator that swims down there. Those are the prime feeding times of the local shark population. Just for the record, just because you don’t see a fin doesn’t mean they aren’t there.

18.  Don’t wade near the reeds.  The Mobile Delta is a great place to go camping and swimming. There are plenty of spots to canoe. A word of warning, the shark is not the only apex predator we have. Alligators love to hide in the reeds and tall grass near the shore. Especially during the day.

19. Don’t feed the gators. If you get caught there is a $500 fine. YouTube is full of videos of people throwing marshmallows at the gators. It may be fun and the gators might enjoy it, but it’s illegal.

20.  Mobilians monogram everything, even underwear.  No explanation needed.

21.  If you kill it, you clean it, and eat it.  Lower Alabama is a sportsman’s paradise. We have hunting and fishing of every kind. I learned  at my daddy’s knee as a tiny girl the golden rule of fishing: you catch it you clean it. By the time I was 8 I could use his knife and gut/clean a fish. By the age of 10 I could fry it.  And yes, that includes baiting your own hook. The same goes for hunting, but I don’t hunt.

22. We drop a moon pie!  Chattanooga may be the birthplace of the legendary moon pie, but on New Year’s Eve we drop a monster sized one off the top of a hotel at midnight. How weird is that?

That’s it for this installment of how weird Mobile is. I know there’s more.