Gumbo is a tradition. First created by Madame Langlois, I don’ know if it’s true but Gumbo has been a part of Southern life since before the Civil War. I think it’s safe to say it was invented in Louisiana.  Like most traditional foods, the recipe for Gumbo depends on the cook. New Orleans gumbo tends to include file powder. I’m not fond of that taste.

I make one with chicken and sausage that is almost as good as the crab gumbo I grew up on–almost.

According to the dictionary, Gumbo is a stew made from a roux with okra and meat.

As you know, I spent part of the summer crabbing in Mobile Bay.

My goal was to make a gumbo like my grandmother. One with crab bodies and claws along with the lump meat. My girls have never experienced that before. Until now. Saturday I bought 4 pounds of shrimp and crab meat then buried myself in the kitchen for hours. All Gumbo starts with the trinity sizzling in a cast iron skillet.

My grandmother’s recipe is a bit vague. I don’t know if it was intentional or not, but it is incomplete. I made several phone calls to my mother, in the process of cooking. Maybe grandma used it as a starting point. Anyway, the recipe card now must be rewritten to include all the things she left out.

A word about okra. I only eat okra fried. I’ve had Gumbo with so much okra that a thick layer of slime rested on top of the bowl. It was gross. I only use a handful of okra and never the ends. That’s where the slime is. You’ve been warned.

At this point, the veggies go in the monster sized stock pot and the skillet is used to make a roux. The base for Gumbo is basically gravy made with bacon fat 🙂 Sorry no pictures of that. Roux is temperamental and prone to burn.

Then you throw the liquid and tomatoes in the pot. Cook a while. Then throw in the seafood. Let it cook another 30 minutes are so. It smells like pure heaven at this point. Ladle it over hot rice with a side of plain white bread. The cheaper the better. Voila– 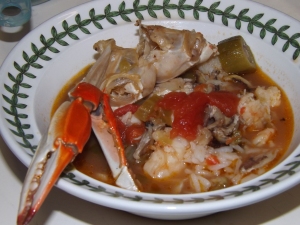 Being the fun parent that I am. I told my daughters the okra seeds were crab eyeballs 🙂 One said, “gross” while the other scarfed them down and asked for more.