I am listening to Lowcountry Bonfire by Susan M. Boyer. I’m not a huge fan of audio books and it took a while to get into the reader’s voice in this one. But the story is wonderful. I love the Liz Talbot Mystery Series.

I am reading the paperback of Homicide for the Holidays by Cheryl Honigford. This is the first time I’ve read a book by this author. So far so good. And let me say this, the paperback is an odd size. Bigger than the traditional paperback but smaller than a hardback. I’m one book off from finishing the Mother-Daughter Reading Challenge and this book fits 😉

The technological starting point for Timeline is the emerging science of quantum mechanics, a field of study so abstruse, so “nonintuitive” that, in Richard Feynman’s words, “nobody understands [it].” Crichton, of course, has never been one to allow complex technologies intimidate him, and quantum theory provides him with the speculative basis for Timeline‘s central conceit: That we live, not in a finite universe, but in a “multiverse” composed of an infinite, constantly expanding series of parallel universes in which all past moments continue to exist. Crichton then posits an imaginary technology that uses quantum computers that are literally capable of “faxing” human beings to selected target areas of the multiverse. The result is a kind of de facto time travel, a phenomenon around which Crichton constructs an exciting — and ingenious — story.

This was my first Michael Crichton book. I enjoyed it more than I expected. Now I get to watch the movie and throw popcorn at the screen during the inconsistancies.

I think I am going to read Regeneration by Laura DiSilverio. This is book 3 in the Incubation Trilogy. Might as well finish it off. I enjoyed the first two books. 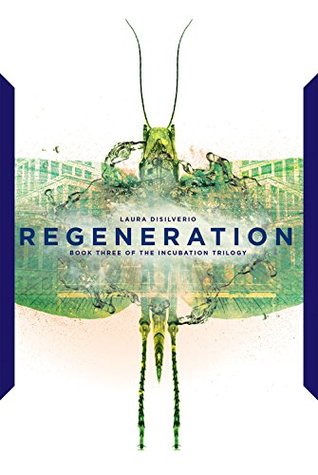 In print, I am reading, Death at the Voyager Hotel by Kwei Jones-Quartey. I found this tiny book in the library as I was walking the stacks. Bonus points: it’s set in Ghana. I’ve never read a book set in Ghana before. I’m on page 88/156, so far so good.

I am also reading, Cry of the Sea by D.G. Driver. A YA fantasy novel. I was reading this last week as well. It’s really good. I’ve been so busy I haven’t had much time to read it.

Set in the lush countryside of Normandy, France, this new novel of suspense featuring Lady Emily Hargreaves is filled with intrigue, romance, mysterious deaths, and madness.

Returning from her honeymoon with Colin Hargreaves and a near brush with death in Constantinople, Lady Emily convalesces at her mother-in-law’s beautiful estate in Normandy. But the calm she so desperately seeks is shattered when, out riding a horse, she comes upon the body of a young woman who has been brutally murdered. The girl’s wounds are identical to those inflicted on the victims of Jack the Ripper, who has wreaked havoc across the channel in London. Emily feels a connection to the young woman and is determined to bring the killer to justice.

I love this series. It’s one of the few historicals I enjoy.

Good question. I have several reading challenges I’m doing but only 1 ends in December. The others are long term. I need a time travel book. I think I will read either:

Timeline by Michael Crichton: In an Arizona desert, a man wanders in a daze, speaking words that make no sense. Within twenty-four hours he is dead, his body swiftly cremated by his only known associates. Halfway around the world, archaeologists make a shocking discovery at a medieval site. Suddenly they are swept off to the headquarters of a secretive multinational corporation that has developed an astounding technology. Now this group is about to get a chance not to study the past but to enter it. And with history opened up to the present, the dead awakened to the living, these men and women will soon find themselves fighting for their very survival — six hundred years ago.

The Eyre Affair by Jasper Fforde- Great Britain circa 1985: time travel is routine, cloning is a reality (dodos are the resurrected pet of choice), and literature is taken very, very seriously. Baconians are trying to convince the world that Francis Bacon really wrote Shakespeare, there are riots between the Surrealists and Impressionists, and thousands of men are named John Milton, an homage to the real Milton and a very confusing situation for the police. Amidst all this, Acheron Hades, Third Most Wanted Man In the World, steals the original manuscript of Martin Chuzzlewit and kills a minor character, who then disappears from every volume of the novel ever printed! But that’s just a prelude . . .

Which should I read?

Lately, the books I’m reading seem to take much longer than I expected. I like the books but they seem to be a bit slow. I don’t know if it’s me or the style of writing– heck it could be my crazy life.

As usual, I’m reading two books. In print I am reading, Dangerous to Know by Tasha Alexander, but 5 in theLady Emily series. I could not remember if I’ve read this book, when picked it up at the library. After starting it, I remember I have but I love her writing so I’m going to reread it. My goal is to read them all 🙂

On my Kindle, I am reading Cry of the Sea by D.G. Driver, book 1 in the Juniper Sawfeather series. I’ve only just started this book but i”m really enjoying it. The plot holds a special place in my heart. The story starts with an oil spill on the Washington (i think) coastline. Our beautiful Gulf Coast suffered a terrible oil spill in 2010, so reading a similar story brings back lots of terrible images.

One of my reading goals this year was to read a wider variety of mystery novels. Not just the light, fun cozies I love. Also not just Southern mysteries. With that in mind, I just finished reading Snakeskin Shamisen by Naomi Hirahara. I loved Mas and the other characters but I had to make sure I gave the book my total attention or I would get lost.

Few things get Mas more excited than gambling, so when he hears about a $500,000 win–from a novelty slot machine!–he’s torn between admiration and derision. But the stakes are quickly raised when the winner, a friend of Mas’s pal G. I. Hasuike, is found stabbed to death just days later. The last thing Mas wants to do is stick his nose in someone else’s business, but at G.I.’s prodding he reluctantly agrees to follow the trail of a battered snakeskin shamisen (a traditional Okinawan musical instrument) left at the scene of the crime…and suddenly finds himself caught up in a dark mystery that reaches from the islands of Okinawa to the streets of L.A.–a world of heartbreaking memories, deception, and murder.

Another book out of my comfort zone, Malice by Keigo Higashino, book 4 in the Kyoichiro Kaga series. I don’t know much about it but it has a pretty cover 🙂

What are you reading?

The Hundred-Foot Journey by Richard C. Morais. Another book was chosen based on a movie I’ve previously watched. This isn’t a large tome, only 242 pages, but I’ve been reading it for a week and haven’t finished it. I like it. It’s beautifully written…just slow.

Louisiana Hotshot by Julie Smith, Talba Wallis book 1. I like it. There was more cursing in it than I expected. Not really a cozy more of a traditional mystery…maybe. Set in New Orleans.  <sigh> I love New Orleans. I don’t know if I liked enough to read the next book but I will give the author another try. The story was very well written.

In Louisiana Hotshot, their job is to hunt down a sociopath and pedophile who’s molested the fourteen-year-old daughter of their client, hangs out on the ragged edges of the rap and recording industries, and has more powerful allies than a Cabinet member.

But both detectives have unfinished business from the past—in Eddie’s case, something he deeply regrets; in Talba’s, a personal mystery, one so frightening no one will help her investigate. But she knows she won’t sleep till she solves it—and the truth will change her forever.

I’ve got several library books I need to read. I’ve already kept them longer than I’m supposed to.

Snakeskin Shamisen by Naomi Hirahara looks interesting. This is book 3 in the Mas Arai series. I haven’t read the first two in the series. I hope that’s ok.

What are you reading?